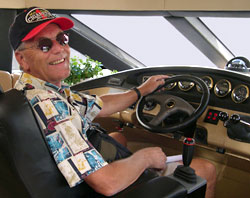 John Andersen, having worn many hats, had a long career in printing both as a graphic designer and photographer, and most recently worked as a USCG licensed captain on several private yachts. He now makes his home in the mountains of Western North Carolina with his very patient wife and six very spoiled felines.

In the author’s first three books, ‘The Final Option Trilogy’, which is now a series, he draws on his yachting experiences in many parts of the world to create a fictional adventure series on the high seas.

He is also the author of ‘Ultimatum’, a Science Fiction novel due out shortly.