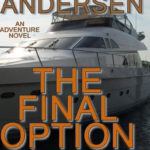 Jack Elliott, a divorced, ex-stock broker has sold his landside accommodations and now lives full time on his seventy foot motor yacht. A chance encounter with an alluring woman leads to a weekend trip with friends to the Florida Keys aboard the yacht, with companionship and maybe more, as the primary motivating force.
Unforeseen circumstances forces the crew of the yacht to reformulate their original plans and an exciting, if risky, adventure unfolds before them, even as a powerful U.S. Senator tries his best to foil their objective; the raising of a lost, gold laden WW II Nazi submarine.
The Senator is also after the submarine, but for totally different reasons, and pursues them in his own yacht with an unerring tenacity which soon becomes unnerving. This yacht, more than twice the size of Jack’s boat, has a captain and crew who are more than willing to carry out the Senator’s every command, legal or not.
From the Florida Keys to Ft. Lauderdale, on to Wilmington, NC, Bermuda, and the island of Eleuthera in the Bahamas, the Senator hangs onto their coat tails with a dogged determination.
With the help of many old and new friends, a lot of detective work and unlimited perseverance, the team finally locates the missing submarine and a lot more besides.
Now the only thing left to accomplish is to make sure that the Senator has been effectively neutralized from interfering.

‘The Final Option (Bahamas)’ is available from Amazon.com for the printed version and from Kindle.com for the e-book. For those who desire a signed copy of this book, or those who wish to purchase film or TV rights, you may contact me at johntheviking3@gmail.com