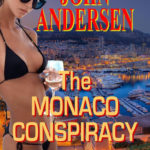 Invited by an influential friend, Jack Elliott, along with his wife, Shannon and several of their friends take the seventy foot yacht, ‘Final Option’, across the Atlantic Ocean to the Mediterranean in order to witness the running of the Monaco Gran Prix, an event they have been looking forward to since their fortunate return from the misadventure in the Caribbean. Unknown to them is the fact that their enemy, Horst Keller, is hot on their trail and he is determined to finally have his revenge on them for causing his downfall. An adventurous ocean crossing later, the crew must somehow escape his insidious plans for them, all the while trying to survive a terrorist attack in the making. Can they prevail against this two pronged attack or is Horst about to finally take his vengeance out on the crew of the ‘Final Option’. Things are about to get extremely ugly.

‘The Monaco Conspiracy’ is available from Amazon.com for the printed version and from Kindle.com for the e-book. For those who desire a signed copy of this book, or those who wish to purchase film or TV rights, you may contact me at johntheviking3@gmail.com